Trending
You are at:Home»FOOD & WINE»Limewood Bar & Restaurant opens in Berkeley 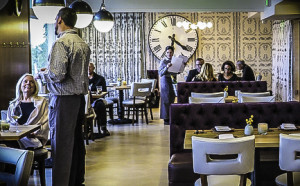 Claremont Club & Spa, an urban resort in the Berkeley Hills, has long been a draw for its spectacular setting and club amenities. Now, a new option offers another reason to visit as the Claremont welcomes Limewood Bar & Restaurant to its dining roster. Limewood replaces the former Antoinette’s which shuttered after a two-month stay.  Where Antoinette’s favored a formal haute cuisine format, Limewood Bar & Restaurant has reversed that theme with its casual elegance and a seasonal, locally sourced menu. On a recent visit I found Limewood a welcoming way station for both the local community and hotel guests alike.

At the front of the restaurant, the bar and lounge opens up to an expansive deck with show stopping views of the Golden Gate Bridge, Mount Tam and San Francisco. It’s a convivial gathering spot with a celebratory atmosphere.  A new drink menu features house-created cocktails accompanied by well-balanced regional wine offerings. I was especially impressed with choices by the glass that, during my visit, included a 2012 Keenan Syrah for just $14. 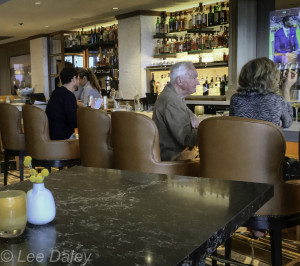 Beyond the bar, the restaurant half of Limewood supports an open concept kitchen. Tables offer well-spaced seating and views out over the hills. Limewood brings Chef Joseph Humphrey to the helm from Napa Valley where he served as executive chef at Michelin three-starred Meadowood Restaurant. His inaugural menu shows an appreciation for local artisans and growers with dishes rooted in farm to table cuisine, expressive of the season. On the opening menu, lamb chops stuffed with spiced lamb sausage as well as cured wild king salmon with fennel, orange and sassafras were featured. My dining companion raved about his dessert, the caramelized peach split with cherry sorbet and pistachios.

As part of the Fairmont Hotel family, Claremont Club & Spa’s Limewood Bar & Restaurant represents a prime example of how an elegant hotel can thrive as a neighborhood social center. Open daily.  For reservations, call (510) 843 3000.  Reservations can also be made at the restaurant’s website: http://www.fairmont.com/claremont-berkeley/dining/limewood-bar-and-restaurant/

Built in 1915 and newly restored, the “Castle on the Hill” sits at the base of the Claremont Canyon Regional Preserve and overlooks San Francisco Bay. Among the resort’s amenities are an impressive spa and club, tennis and fitness center and kids’ pool. The Claremont shares the Fairmont umbrella with such iconic hotels as The Plaza in New York, The Savoy in London and the Fairmont Peace Hotel in Shanghai. 41Tunnel Road. Berkeley, CA 94705. www.fairmont.com/claremont-berkeley

Related Information about the Claremont Club & Spa: On Thursday May 17, 2018, The Claremont Club & Spa, a Fairmont Hotel and home of the Limewood Bar & Restaurant donated over $12,000 to the American Himalayan Foundation. Over the past two years, ten percent of private event rentals of the Hilary Tenzing Room have been earmarked to support this foundation. Claremont Club & Spa will continue this donation initiative which assists in enhancing healthcare, building homes, providing better education, and creating safer environments for the Himalayan people.

Paying homage to the first duo to ever climb Mount Everest, the Hilary Tenzing Room, is a dedication to Sir Edmond Hillary and Sherpa Tenzing Norgay. A vision created by Richard Blum, the founder of The Himalayan Foundation and equity partner of Claremont Club & Spa. Established in January 2017, the Hilary Tenzing also contains some of the original artifacts used and photos taken during the first climb. For more information on reserving this private space please contact The Claremont Club & Spa.