Trending
You are at:Home»DESTINATIONS»Mexico’s Yucatan: Deep into Mayaland with Victory Cruise Line 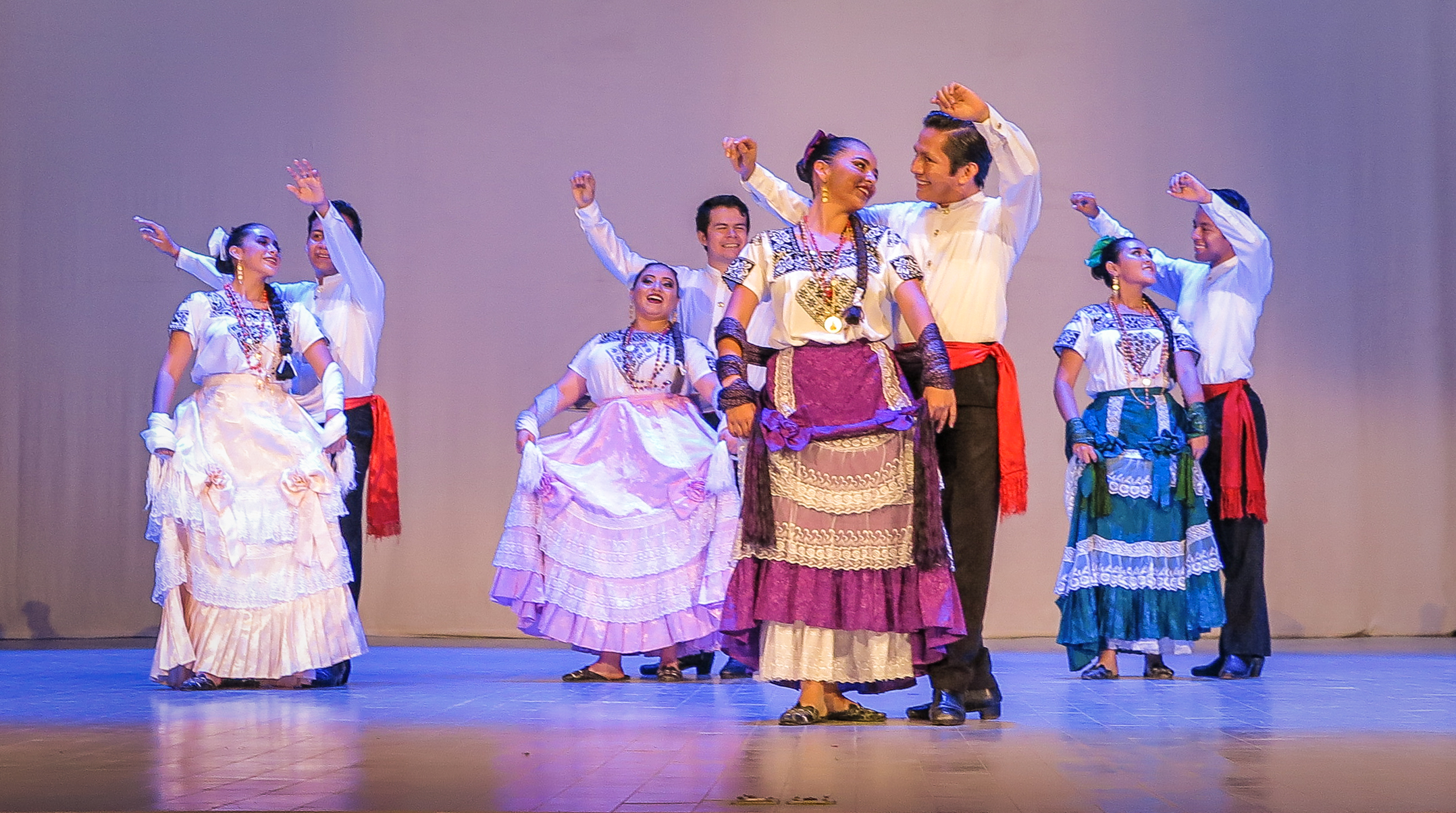 Once accessible only by sea, Mexico’s Yucatán is a place steeped in history. Here, both Mayan traditions and modern life flourish peacefully in a setting of architectural and natural beauty. Some of the most wonderful ways to experience the true Yucatan are to stay at a traditional inn, spend time with a Mayan shaman, swim in a cenote, visit a hacienda, explore ancient ruins and dine on Mayan and Mexican cuisine in a candle lighted cave. My spouse and I have just returned from a eight day intensive exploration of the highlights of an upcoming land/sea voyage with Victory Cruise Lines, colloquially dubbed the “thinking person’s cruise choice.”  Our Yucatán outreach safari stretched from the Caribbean coast in the east to the Gulf of Mexico in the west in this first of the cruise line’s five land and sea forays into Mexico’s Yucatán Peninsula.

During our travels, we ended up nicknaming our guide, Jesus, a “walking encyclopedia,” because of his vast knowledge of the Yucatan and its Mayan history. Each day, Jesus regaled us with tales of Mayan folklore and fantasy. He walked us through Mayan ruins and sidestepped us past massive cenotes, (fresh water underground sink holes.)  We shared a shaman’s healing ceremony, explored magnificent colonial cities and cathedrals and over-nighted in luxurious lodgings located within a Mayan archeological site, a mere ten-minute walk from the sacred city of the Maya, Chichen Itza.

Entering through one of Tulum’s five ancient doorways, our guided tour took us back thousands of years to Tulum’s glory days as an important trading port. Its walled ruins, towering above the Caribbean, were most likely a beacon to approaching ships. Legend tells us Tulum was also called Zama, meaning City of Dawn, because it faces the sunrise. With our guide’s interpretations, we were able to decipher well-preserved symbols depicting healing ceremonies and childbirth rituals carved into the ornate upper facade of the Temple of the Frescoes. Because of their female cycles, healers and astronomers in Mayan cultures were often women. 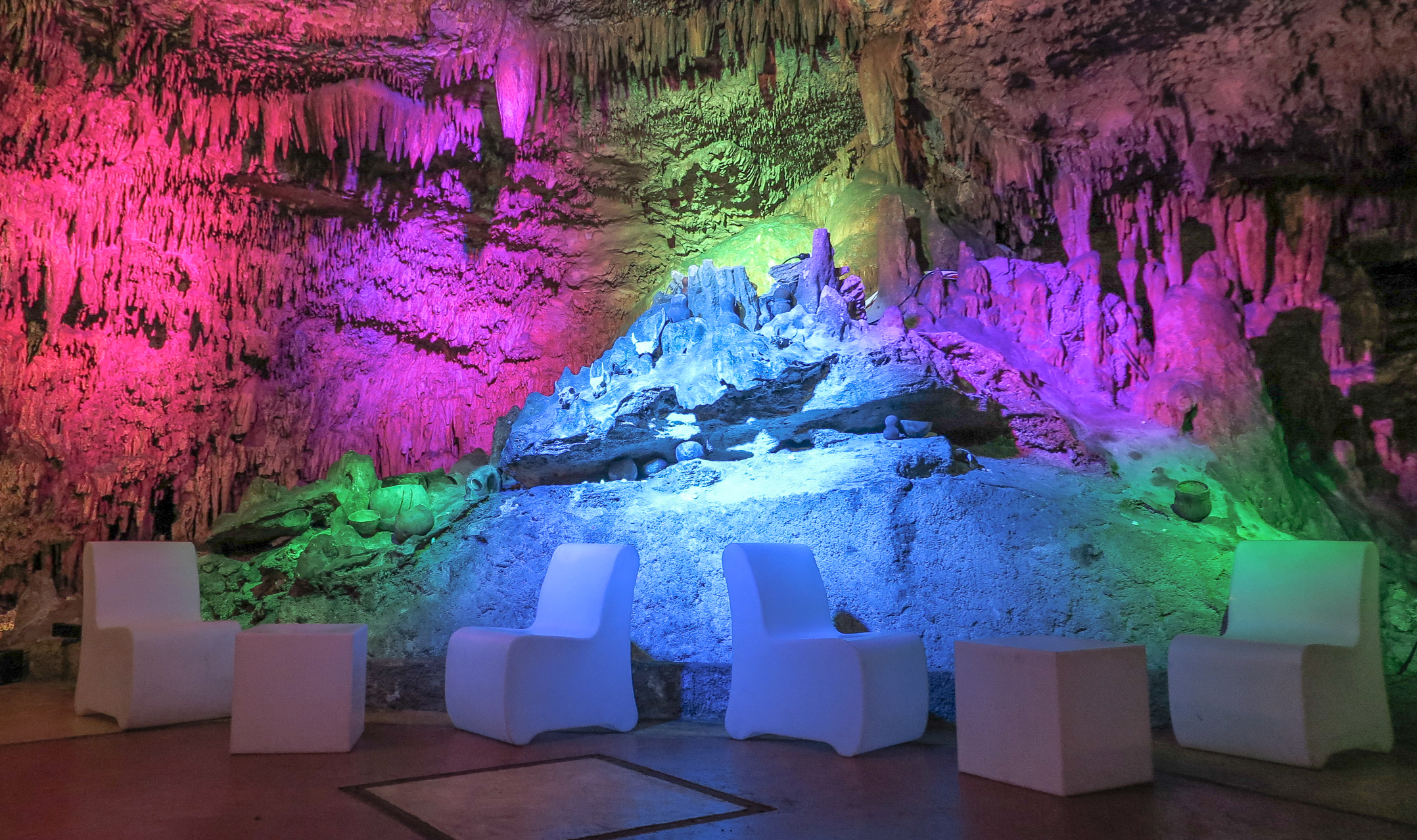 Alux Restaurant Cavern, Playa del Carmen: Lunch or dinner is a memorable occasion in this chandelier lighted centuries-old cave. Here is where we had a buffet lunch in true Yucatán style: rice, beans, salsa fresca, beef, chicken, fresh grilled fish (pescado) and drinks topped off by a dessert of Panna cotta with blueberry sauce and mint leaf.

Going deeper into Mayan history, we attended an evening performance at Xcaret.  Mexico Espectacular is a kaleidoscopic performance with more than 300 actors and dancers, authentic costumes, advanced technology, and elaborate sets. Extremely well done, it dramatically traces Mexican history and culture from pre-Hispanic times to the modern era. The outstanding performance come with the option of a five-course dinner served at your table during the show.  It was one of the best meals of our trip. 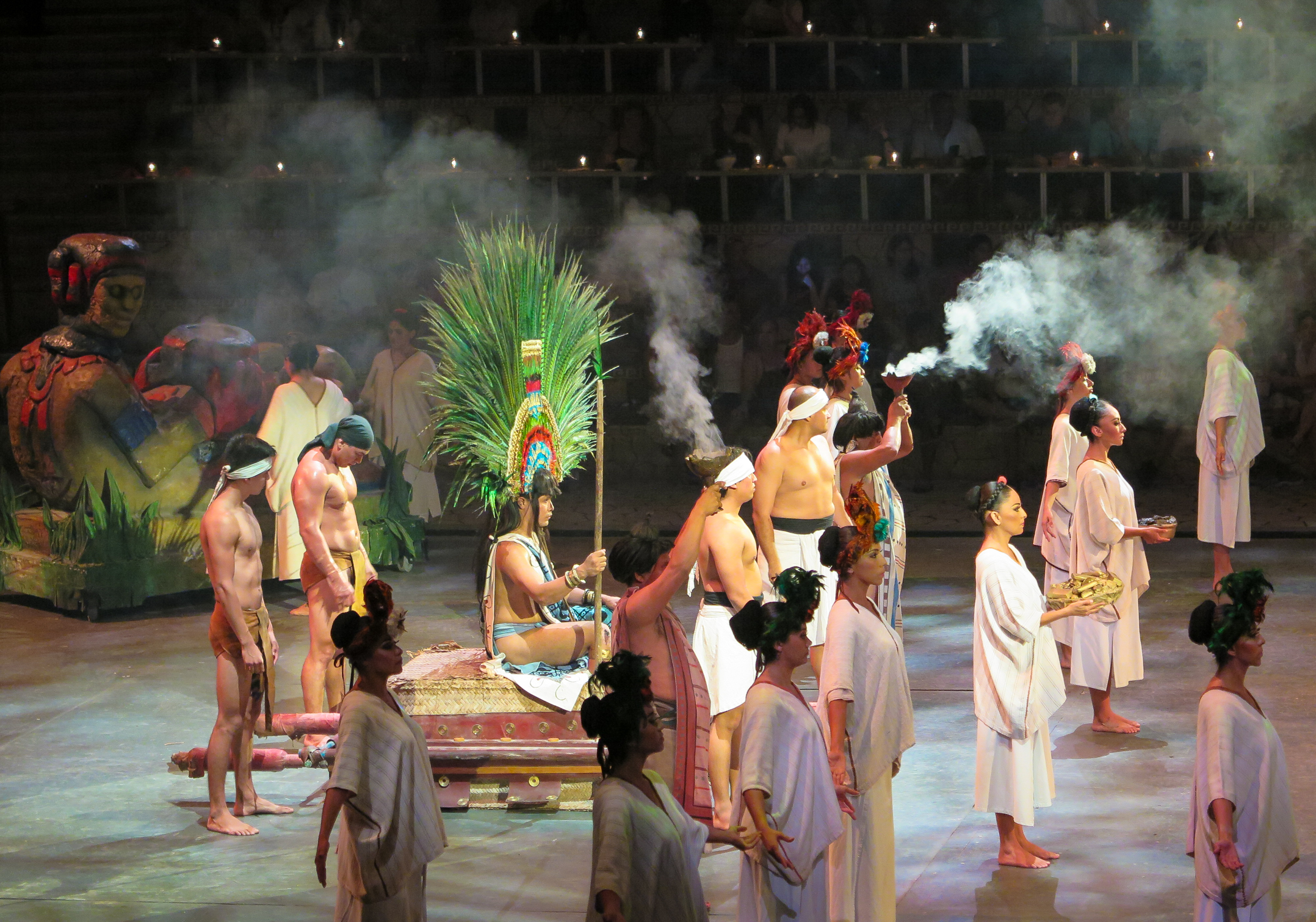 Traveling west from Tulum, we spent time in the magnificent colonial city of Valladolid.  Splendid cathedrals and churches surround the city center.  Here, we discovered one of the most extraordinary personal collections of folk art in all of Mexico. Casa de los Venados contains thousands of unusual, original Mexican artworks including sculptures, murals, paintings and furniture. As artwork, the furniture collection throughout the house rivals that of world-renowned designers. One room alone is dedicated to the legacy of Frida Kahlo. Contained within the private domicile of John and Dorianne Venator’s restored 18,000 square foot home, the guided tour is both a cultural experience and a venue for the owners’ generous largesse in sharing their passion for Mexico. (John collected marbles as a child and bought the first of his Mexican treasures, a straw hat, when he visited San Cristobal de las Casas at the age on 18.) Admission is free; any and all donations benefit local charities. The collection here is so striking and impressive, one feels a sense of gratitude to the Venators. They have personally commissioned many pieces directly from the artists and as I walked through, I could sense their spirits here. Reluctant to leave at the end of my visit, I felt imbued with and immersed in the mysticism and magic of Mexico. 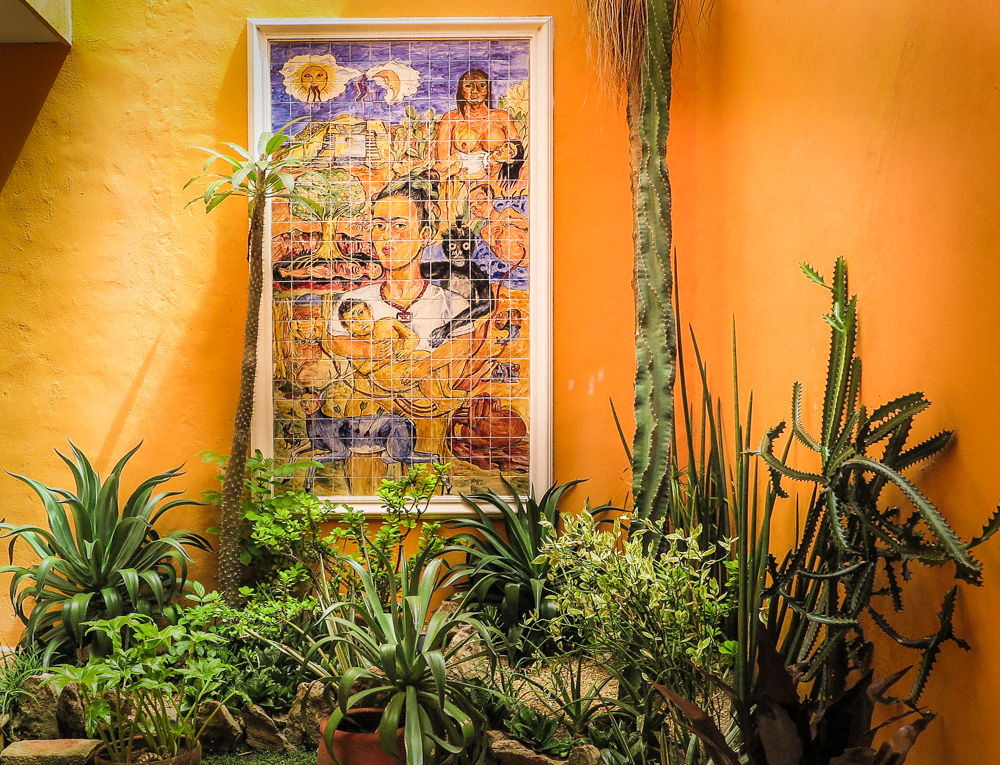 After visiting the museum, be sure and stop for lunch in one of the open-air cafes surrounding Valladolid’s central zocolo. Sample some of the city’s regional cuisine with traditional favorites like Cochinita Pibil (pulled pork) and Relleno Negro De Pavo (black turkey soup.)

Time at a Cenote:  Cenotes are natural wells that begin with a little crack, then a cavity before evolving into vast aquafers that feed out into the Caribbean or the Gulf of Mexico and date back to before the Maya. The Yucatan Peninsula has tons of these underground caves that contain the clearest water you’ve ever seen. Victory Cruise’s itinerary took us to Hacienda Selva Maya, where after a lavish buffet lunch, we indulged in the crystal clear waters of Cenote Saamal, a limestone enclosed oasis where waterfalls cascaded over the cenote’s rim. 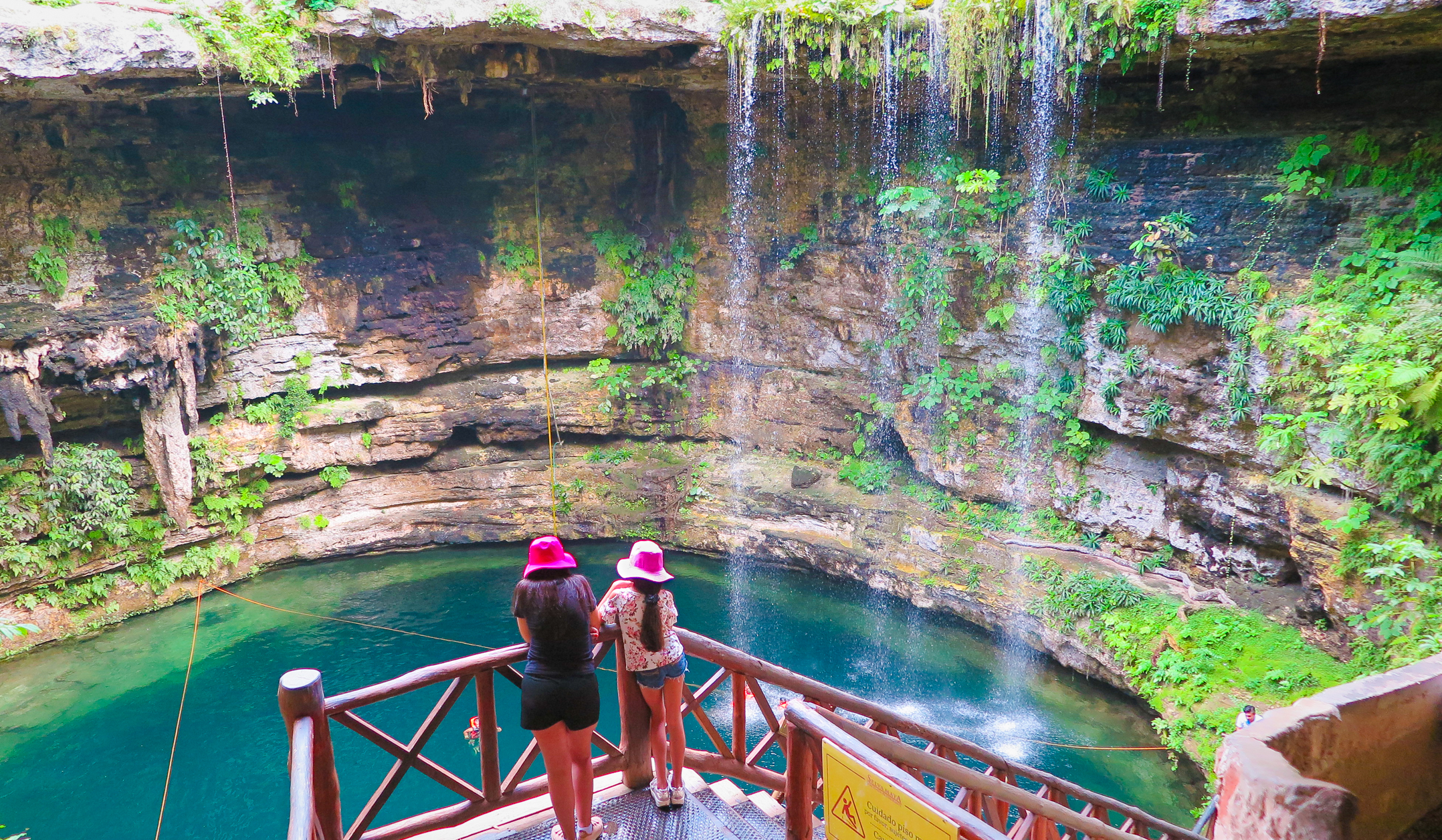 Chichen Itza: No visit to the Yucatán should bypass the UNESCO world heritage site of Chichen Itza and Victory Cruise Line did not disappoint when they blessed us with tickets to the breathtaking night time “Sound and Light” show and then added in a sunrise tour the following morning. Our stay in a cozy cottage at the Mayaland Hotel was right on the grounds of the archaeological site. From the hotel, we walked along a direct pathway into the grounds of Chichen Itza. Our morning guide took us to the famed ball court where Mayan players had vied to score points in a life and death battle. We took turns hearing our voices echo against the stone walls of the temples and grabbed photos of the sunrise glowing against the backdrop of the temple, Kukulcan, known as El Castillo, “the castle.” 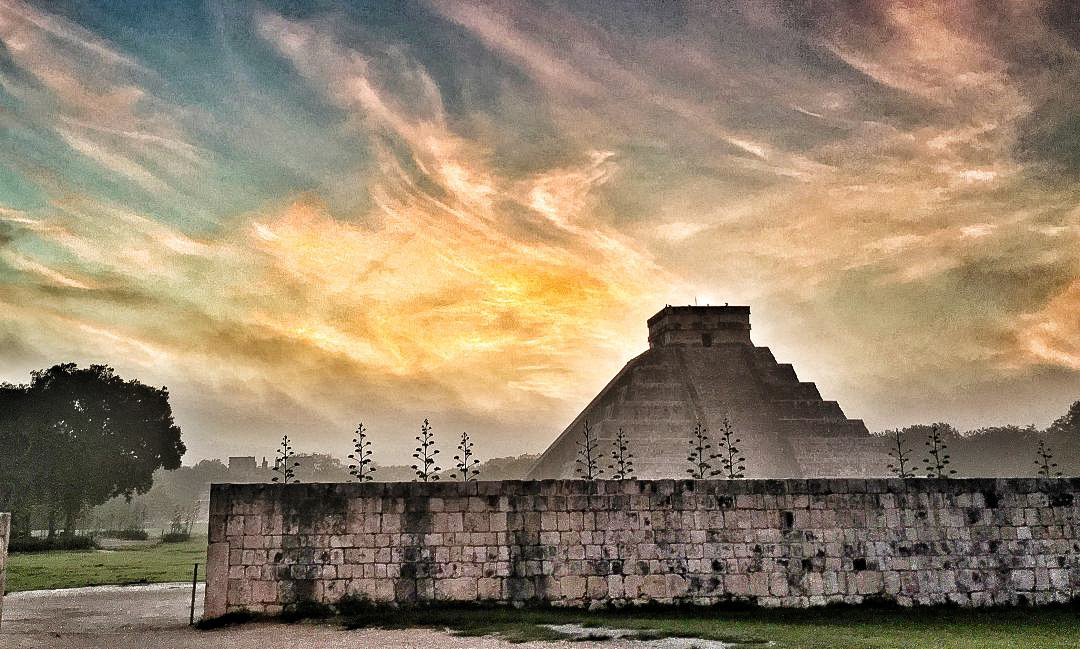 Mayan Magic: Twice a year during the Spring and Fall equinoxes, light and shadows on the steps of the pyramid create the image of a descending snake. The temple has 365 steps – one for each day of the year – which is only one example of how sophisticated the Mayan culture was, and how they integrated their knowledge of the natural world into their temples and religious centers. During the sound and light show, with the towering pyramid of Kukulcan as the main backdrop, choreographed light and shadows bring to life once again the snake-shaped phenomenon as it descends the steps of this 1,500-year-old Mesoamerican ruin. 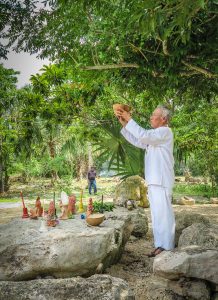 Time with a Shaman: Nolo, a small welcoming community of only 1,500 residents, offers an even deeper immersion into Mayan/Yucatan life through a shamanic interlude. By special arrangement, our group met with a local shaman priest who, in a tree-sheltered glade, graciously performed a healing ceremony for us. 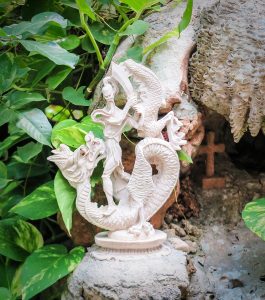 Buddhist-statue, a gift of Tibetan Monks.

While there, I noticed a small Buddhist sculpture set upon a wooden altar. When I inquired about it, I was amazed to hear that visiting Tibetan Monks from the Drepung Loseling Monastery had, during the Dalai Lama’s visit to the Yucatan, wandered into this small community.  Drawn by its spiritual energy, they left the sculpture as a token of their visit. 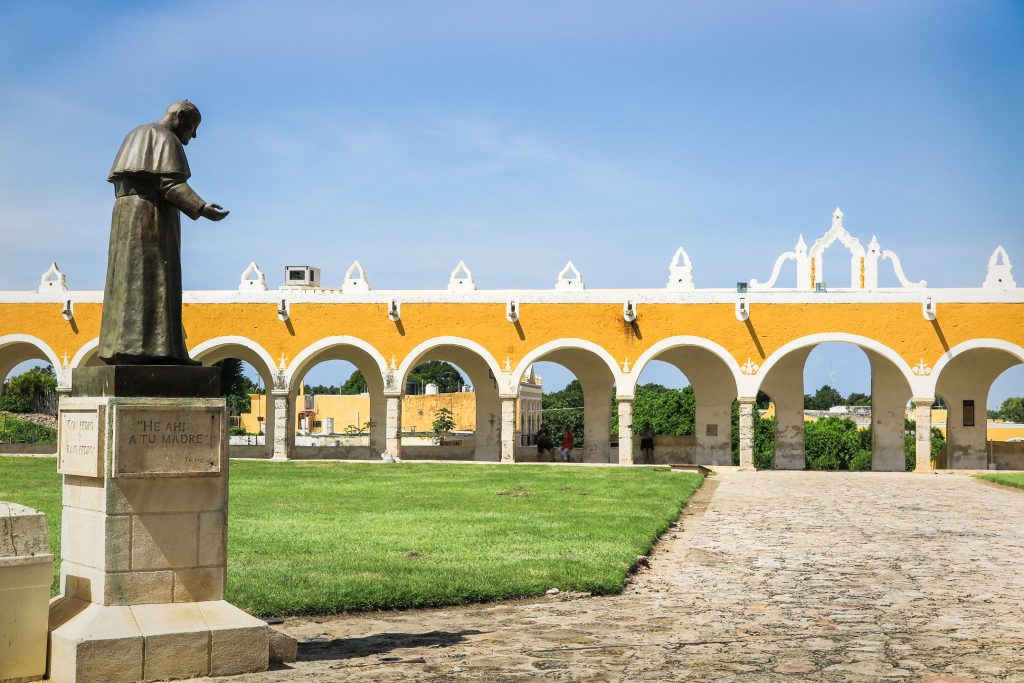 Residents painted the town yellow to honor Pope John 23rd’s visit in 1993. So loved, he is called Papa Mexicano; even a song was named for him because, en route to the city, he wore a sombrero and serape. All the representatives of Indian cultures, including Inuits, attended when he spoke. Most memorable is his apology to the people:  ““And I ask you to pardon what we did in the name of the Cross.”  Photo taken at Antonia de Padua Monastery. which we visited en route to Campeche.

Hacienda tour via horse drawn train ride. Once the setting for the cultivation and production of sisal, Hacienda Sotuta boasts a grand estate that once overlooked the growth of Yucatan “green gold,” as sisal was called.  No longer a functional site, the hacienda opens a window onto another time in Yucatan life.  A horse-drawn train ride took us through the fields where we met Antonio, the “plantation’s” oldest resident, a gentleman of 84 years. Born on the hacienda, Antonio has spent his entire life there. Speaking only Mayan, his mother tongue, he lacked not for communication. His open arms and welcoming smile spoke volumes. We followed a tour of the site with a luncheon of authentic Mexican fare before setting off for our last stop, the colonial city of Campeche.

Ah, Campeche: At first glance, I felt Victory Cruise had saved the best of the Yucatan for last and after two days strolling the cobbled streets of this Colonial gem – recognized as a UNESCO World Heritage Site- I was sure they had. From the charming main plaza of town, handsome centuries-old mansions spread out between pastel-hued buildings and the well-curated Archaeological Museum. Shopping for quality folk arts and hand crafted jewelry is plentiful with two major outlets on a pedestrian-only avenue. One of the region’s most famous crafts and exports is known 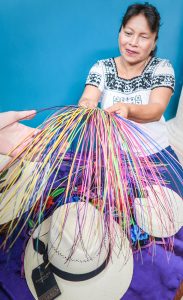 locally as Jipijapas. The Yucatán version of the Panama hat is still woven by hand from the pliable leaves of the Jipijapa palm tree. Just north of Campeche, the village of Becal is especially known for the fine quality of its hats. I brought one home with me.

We toured the ramparts of this walled city and learned that pirates had found Campeche a tempting harbor town too; thus the walled exterior that sits back from the harbor.

Be sure and attend a flamenco performance in Campeche City’s local theater for a taste of classical entertainment. We took in our second “Sound and Light” show here one evening at the city’s central plaza where, once again, we savored a taste of visuals and music projected onto the façade of the grand town library building. A regular occurrence on Friday evenings, the event brings out families and couples enjoying a welcoming start to the weekend. For us, it was a fitting finale to a magical stay in the Land of the Maya. 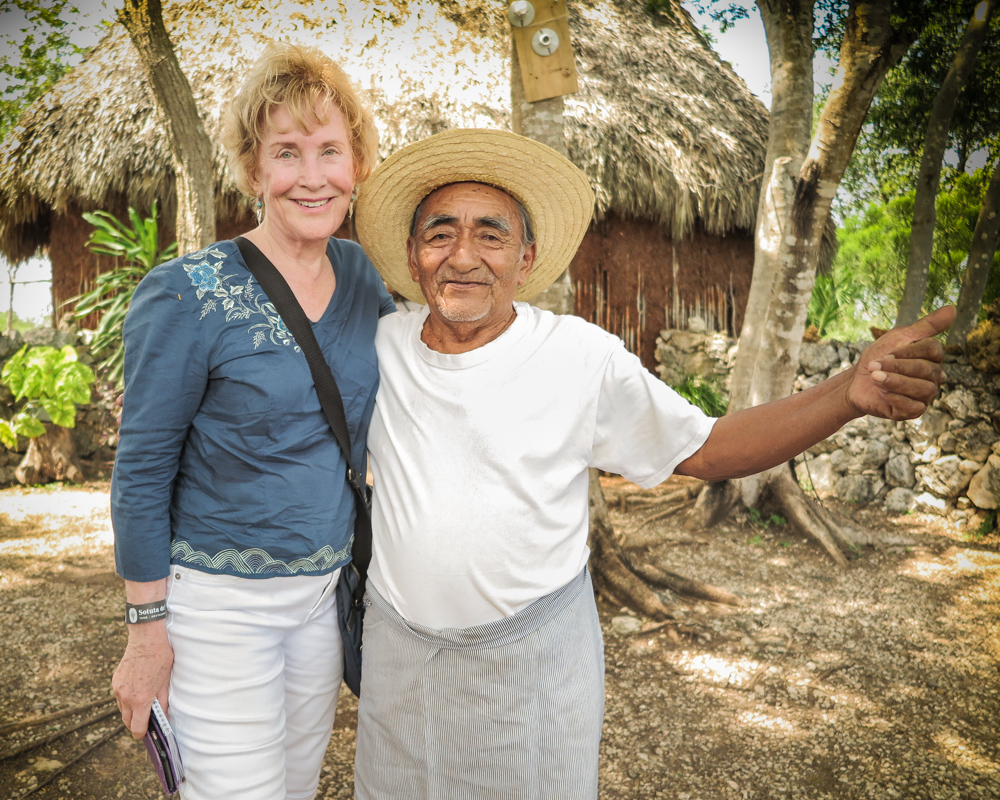 The author with Antonio, her Mayan friend.