Trending
You are at:Home»DESTINATIONS»New Mexico through O’Keeffe eyes
I’m not sure whether it was “Purple Hills II” or “Lavender Hill with Green 1952” that gave me what I call the Georgia O’Keeffe itch but, when a friend gifted me with a coffee table book commemorating the artist’s New Mexico paintings, I knew I had to set foot on the land that inspired so much of her work. The urge to roam the red rock hills of O’Keeffe’s American Southwest and breathe its sultry air was palpable. Was it Georgia O’Keeffe who called out to me or was it New Mexico?  Perhaps both, but O’Keeffe and her artwork embodied both the message and the messenger.
When I learned that the Ghost Ranch Foundation schedules visits through what is now a restricted area of her beloved land, I booked a date. The tour’s route encompasses actual locations painted by the artist.  Here, the iconic red, yellow and white hills, called “Shining Cliffs,” have endured for millions of years.  But it was O’Keeffe who introduced them to me and so many others.
Two Homes in the Desert: O’Keeffe came upon Ghost Ranch in 1934 while exploring the surrounding desert in her Model A Ford. Cradled beneath coral-colored cliffs, the isolation and rustic feeling of the ranch suited her. She rented a bungalow room for the night and ended up staying the entire summer. Before long, she fell in love with the location and returned every year.

One of the places she most cherished was Mount Pedernal.  From the back of her bungalow she could see the flat-topped mountain rising from the desert floor. Jokingly, she once said, “It’s my private mountain. God told me if I painted it enough, I could have it.”  By 1940, she had purchased the Ghost Ranch adobe home along with seven acres and the view was hers for the rest of her life. Then, in 1945, O’Keeffe planted more roots in nearby Abiquiu with the acquisition of an abandoned hacienda on land overlooking the Chama River. She spent three years restoring this second home, converting its former corral into her studio.

The Drive to Ghost Ranch from Santa Fe:  Golden leaved cottonwoods glittered in the sunlight as I drove north from Santa Fe along Highway 84. I had spent my first day in this capital city at the Georgia O’Keeffe Museum where I immersed myself in O’Keeffe’s fearless vision. The museum is almost certainly the only one in the country dedicated to one woman’s art. Spend a few hours here before heading out into the high desert.  If you do, you will see O’Keeffe Country through her eyes. I almost felt she was sitting next to me as I motored past massive red rocks and jutting mesas. Several times, I felt convinced that certain views were those I had seen depicted in one of her paintings. Then I would come upon another setting just as convincing and surreal. The New Mexico sky seemed to go on forever and I felt a profound sense of appreciation for what O’Keeffe called “the best place in the world.”

I soon drove past Abiquiu, a tiny settlement once inhabited by Anasazi Indians. The road bypassed a turn leading to O’Keeffe’s Abiquiu home, a restored hacienda where she often spent summers painting and tending her organic garden. Entering the driveway unattended is not allowed so I continued along the sleepy two-lane highway leading to Ghost Ranch, some fifteen miles north, with plans to visit the hacienda on tour later that day. 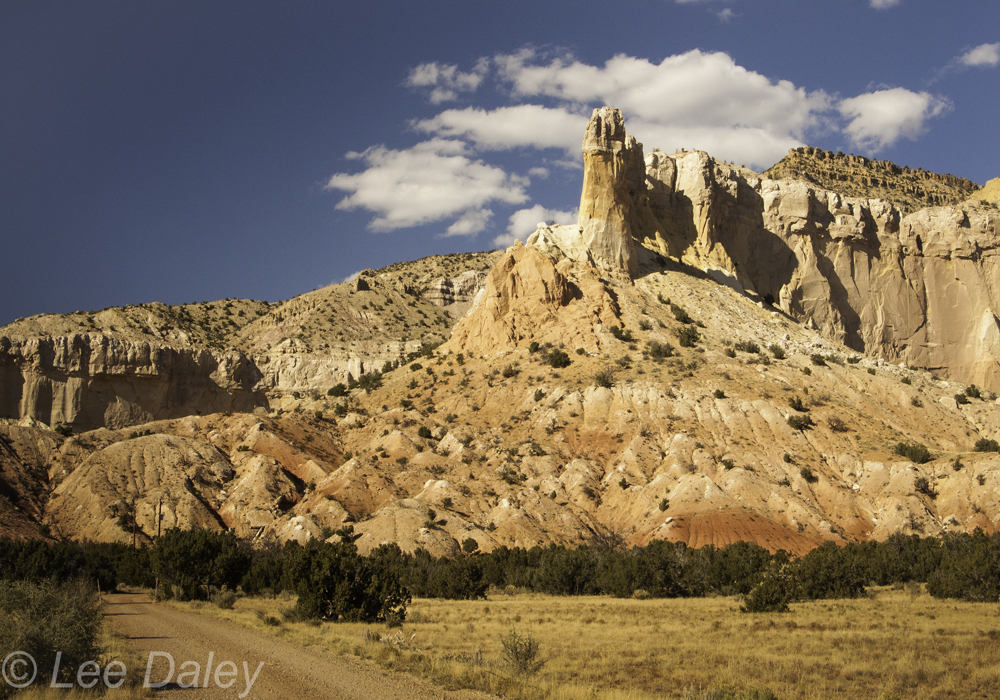 As I approached Ghost Ranch, I felt a growing sense of isolation and serenity. The spaciousness of the desert and mountains dwarfed the ranch’s main building. I pulled up just in time to watch a preliminary slide show before joining Karen Butts, the center’s excellent guide, along with several other guests. At pivotal points on the route, Karen held up copies of O’Keeffe’s paintings so we could compare the raw landscape with the artist’s interpretations. We were able to stop often and were never rushed. Approaching Chimney Rock, red and yellow sandstone cliffs rose from the desert floor, sharply etched against a sprawling blue sky. Canyon walls sparkled as the midday sun shifted its light under fast moving clouds. A soft wind came up carrying with it a scent of sage, pungent, dry and sweet. The day was clear with bright light and one could see great distances. I imagined O’Keeffe standing at my side and wondered if the land felt her absence. Or even still felt her spirit. 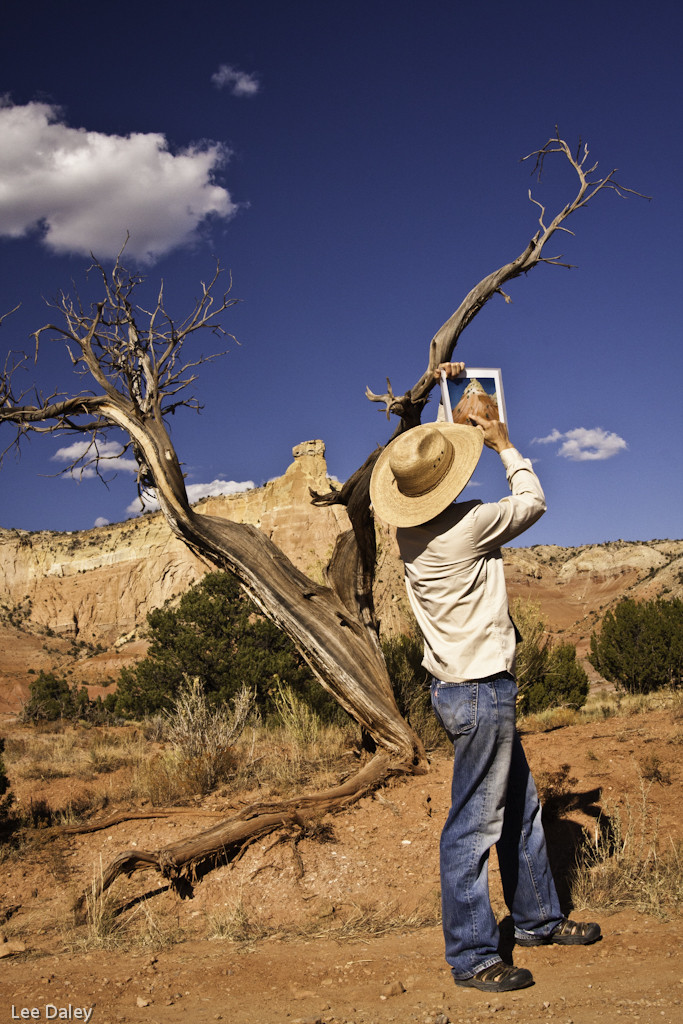 We were not able to enter O’Keeffe’s Ghost Ranch home due to its poor state of repair. Disappointing, but I had really come to see what she loved most- the red and yellow mesas, Chimney Rock, majestic Pedernal Mountain. For that  day, Georgia O’Keeffe Country was all mine- solitary, spacious, breathtaking.

The Abiquiu Home and Studio:  Later on, I visited the Abiquiu hacienda. Its rounded exterior and earthy stone walls appeared part of, not separate from, the surrounding hills. Rocks and bones, remnants of O’Keeffe’s desert rambles, decorated an inner courtyard.  All was spare.  A sense of “less is more.” helped me see the artist’s vision.  She chose only what she loved.
I spent the rest of the afternoon exploring the hills and desert on my own. In all of this I was joining a long line of O’Keeffe pilgrims. Her life has spawned a bouquet of biographies, each telling the story of her ultimate flowering in the desert.  Everywhere I looked I felt her presence and couldn’t help reflecting on her saying, “When I got to New Mexico that was mine” In a way, it still belongs to her. In another way, through the message conveyed in her paintings, she gave it to us. As darkness fell, I bid farewell to hills faded into hues of lavender with a toast to Georgia and a promise to return.
Where to Stay:  I booked a room in Santa Fe at the Santa Fe Inn, not only because it was highly recommended for its personal service, but because I was also told it is the only Native American-owned hotel in town. Impressed by its authentic looking Pueblo-style exterior, I explored the grounds where a number of  American Indian sculptures are strategically placed. Outstanding examples of Pueblo art and artifacts throughout the interior add another authentic flair. It’s an easy walk to the downtown plaza and a hotel shuttle takes guests to all the high points in town quite regularly.  Out to dinner one evening, I called the inn and its shuttle service promptly arrived to carry me back. My mini-suite offered quiet and comfort at the end of the day and I appreciated the on-site Amaya Restaurant, where I enjoyed a sumptuous dinner my last evening in town. (www.hotelsantafe.com)

Ghost Ranch:  With rustic, comfortable housing accommodations reflective of its origins as a working ranch, a stay at Ghost Ranch places travelers in the heart of O’Keeffe Country. Every unit offers vistas of the sandstone cliffs, cottonwoods and distant mountains. Amenities are basic but after sundown, expansive skies light up with panoramas far more dazzling than those of city lights.(www.ghostranch.org)

Not only was she in love with the desert around her but Georgia O’Keeffe adored New Mexico’s abundance of fresh produce and could often be found browsing the stalls at the Santa Fe Farmers’ Market. 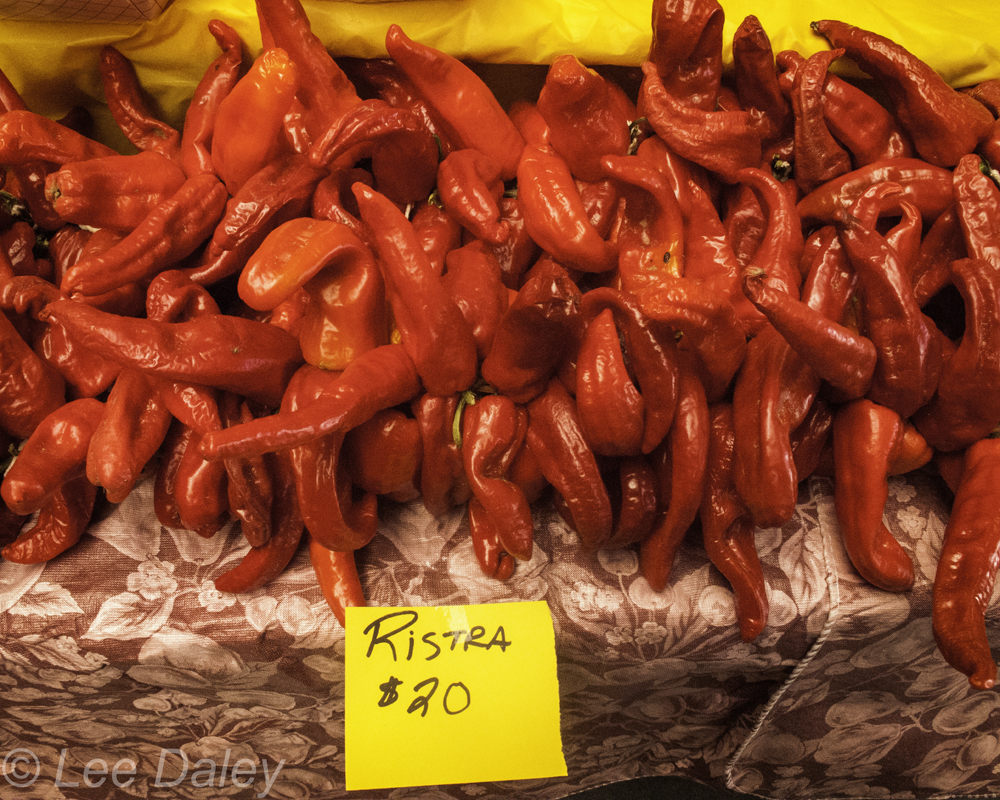 Georgia O’Keeffe Museum: Housed in a Pueblo Revival style building two blocks from Santa Fe’s historic plaza, the collection encompasses more than 1,000 O’Keeffe paintings, drawing and sculptures. Throughout the year, visitors can see a changing display of these works as well as special exhibitions featuring O’Keeffe work along with that of many of her contemporaries. (www.okeeffemuseum.org)
For more information: Santa Fe Convention and Visitors Bureau, 201 W. Marcy St, Santa Fe, New Mexico
(www.santafe.org)      “Where I was born and where and how I have lived is unimportant. It is what I have done with where I have been that should be of interest.”  ― Georgia O’Keeffe
Share. Twitter Facebook Google+ Pinterest LinkedIn Tumblr Email